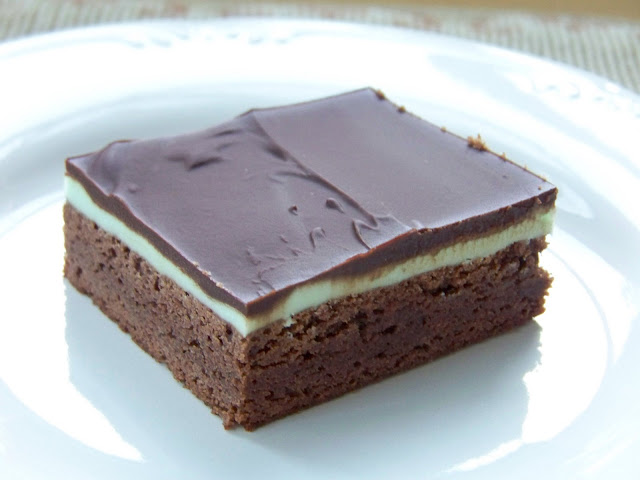 Who can resist chocolate paired with mint? We made these delectable brownies yesterday to celebrate Morgan's 10th birthday since they are one of her favorites. I've made this recipe several times and it never fails to please. And, if you have the ingredients on hand, they are just as easy to make as those from a box! Needless to say, they are all gone this morning.

Brownies:
Preheat oven to 350. Lightly butter an 8x8 or 9x9-inch metal baking pan. Melt the butter and chocolate in a small saucepan over low heat until smooth. Set aside. Using an electric mixer, beat eggs and sugar in a large bowl until light and fluffy, about 5 minutes. Add chocolate mixture, flour and salt, and peppermint and vanilla extracts; stir until just blended. Transfer batter to prepared pan. Bake 25 minutes for 8x8 pan and a little less for 9x9 pan. Cool slightly.

Toppings:
Beat powdered sugar, 2 T butter, milk, peppermint extract, and one drop of green food coloring, if using, in a bowl until creamy. Spread over brownies and chill until set, about one hour.

This year, my mother-in-law planned a pie baking contest to celebrate the summer and to pay tribute to the "lost art of pie-making". It was a fun excuse to gather friends and family. 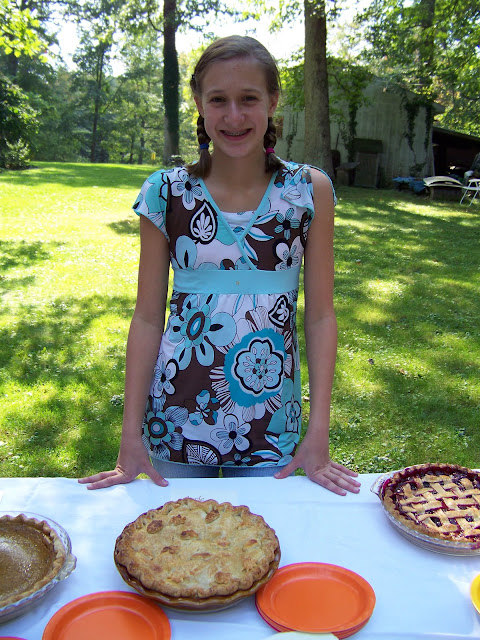 Ellen baked her very first pie. It was an apple pie with cut-out pastry leaves decorating the top. It was delicious! She was the youngest contestant. The pies I made were pumpkin pie (left) and raspberry/blackberry pie with a lattice crust (right). 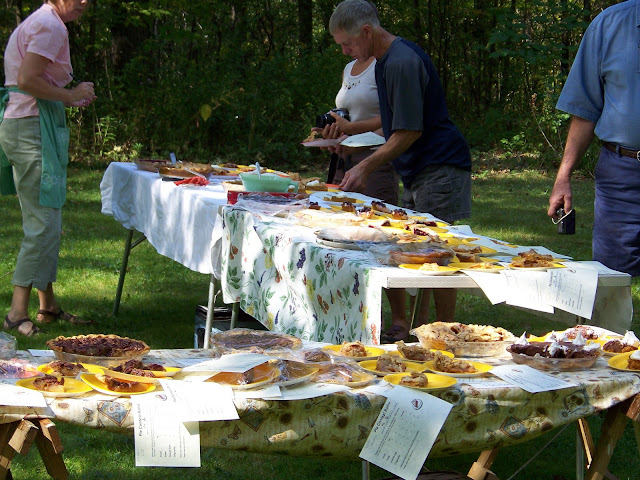 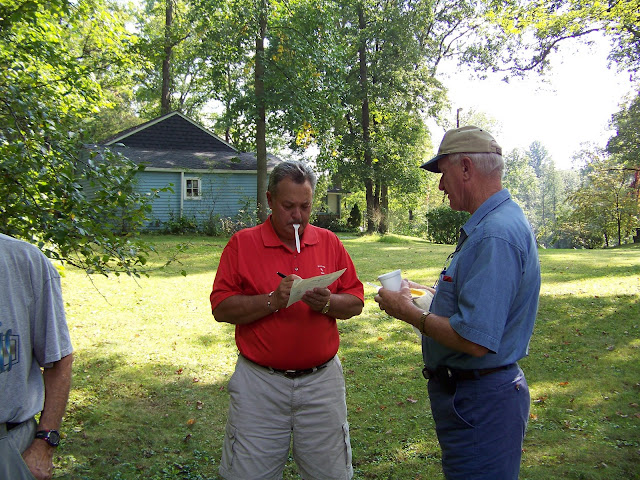 The judging was difficult. These were two of the most experienced judges - they took their job very seriously! 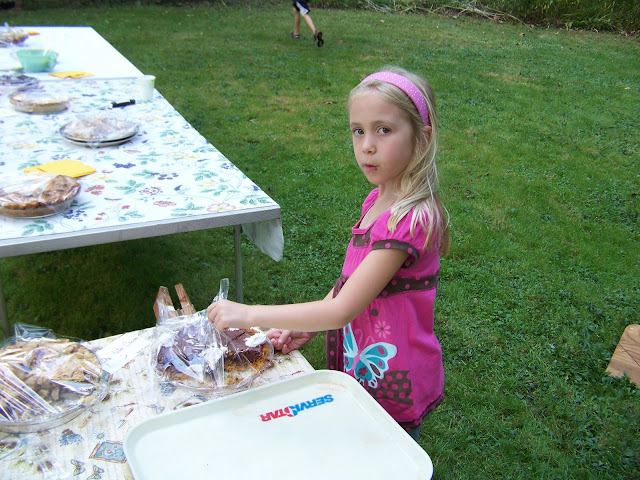 Annie is checking out a chocolate mousse pie. 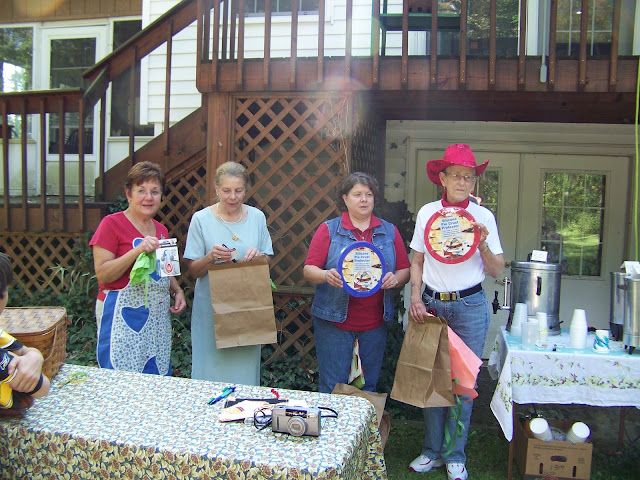 Email ThisBlogThis!Share to TwitterShare to FacebookShare to Pinterest
Labels: Family

The Making of Apple Cider

While my kids loved the hay tunnels and corn stalk maze and the hay ride around the orchard, my favorite part of visiting Soergel's this year was the cider press demonstration. 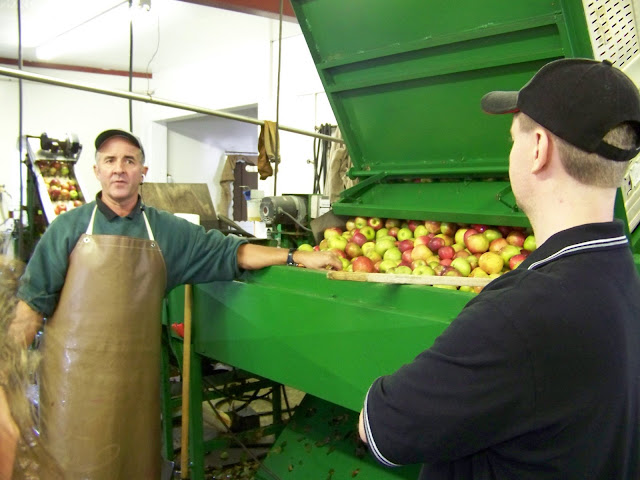 First, they use a forklift to bring in a huge bin full of different varieties of apples and dump them into a holding area at the start of a conveyor belt. 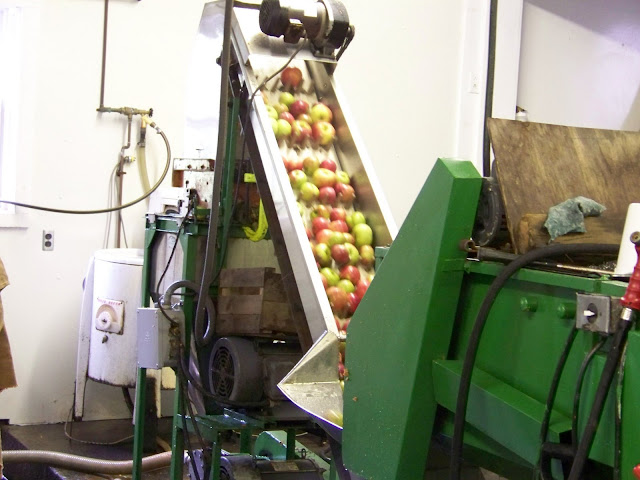 The apples are fed into the machine which rinses them and carries them up the ladder to be ground up by a very loud "food processor". I had always envisioned whole apples being pressed, but this makes much more sense. 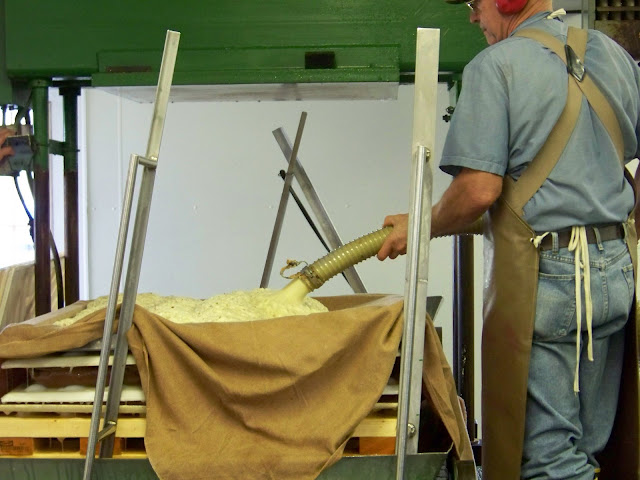 The apple "mush" is then pumped into trays lined with canvas. When each tray is filled, the canvas is wrapped around the apples and another tray of apple mush is made on top until they have about a dozen trays of apple mush all stacked on top of one another. The trays are then pressed between the "floor" and "ceiling" of the machine and all of the liquid is captured in the tray around the "floor" of the press. The liquid is then pumped through tubes into a large holding tank where it is pasteurized and then bottled. One batch of trays will make about 300 gallons of cider. The pulp/fiber left over is as dry as cardboard and they use it as mulch which eventually returns the organic matter to the soil. Very cool process to watch.
1 comment:

Email ThisBlogThis!Share to TwitterShare to FacebookShare to Pinterest
Labels: Family

And the winner is... 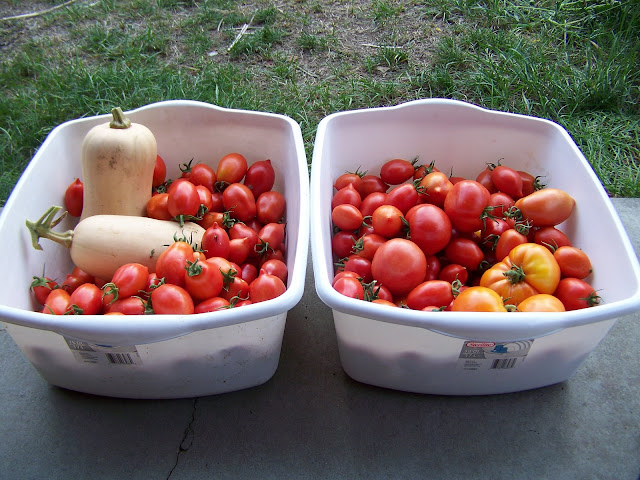 The tomato harvest was good this year. Above is only a fraction of our harvest. I probably didn't water them as much as I should have when we endured a fairly long period of drought. We lost some to blossom-end rot. The tomato hornworms tried their best to foil me. But we had no aphids and the pests generally left the plants alone, going for the tender cucumber plants instead. So we waited...and waited...and waited until finally the tomatoes started to ripen in late August. 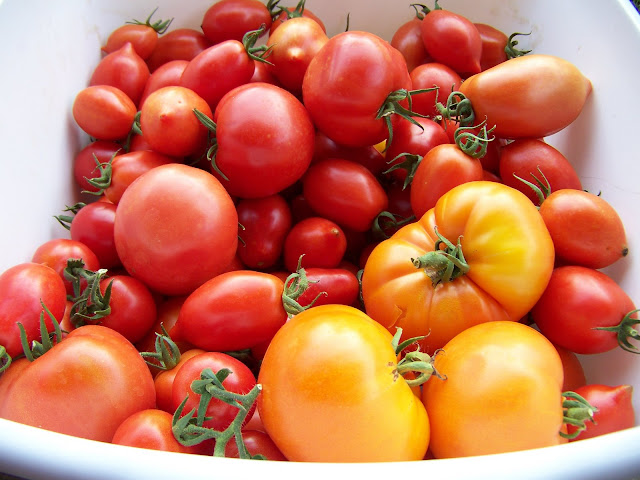 I planted about 8 different varieties, and THE WINNER IS ... a variety called CARO RICH. They are the orange tomatoes in the picture above. I think the seeds were a packet of freebies I got from Seeds of Change when I ordered the other varieties. These plants almost didn't make it into the ground as they were the spindliest seedlings, but I'm sure glad I gave them a shot! They are a larger, meaty tomato perfect for slicing onto a juicy burger or tomato sandwich or BLT. They were the best tasting of the bunch - if only I'd watered them a bit more I may have gotten a few more. I'm sad to see the last of the tomatoes being harvested, but I've canned and frozen quite a few to enjoy in sauces throughout the year until we start all over again - and I'll be sure to include the Caro Rich in my order next year.
1 comment:

Email ThisBlogThis!Share to TwitterShare to FacebookShare to Pinterest
Labels: Gardening

The star of our garden this year was something I didn't even intend to grow! I noticed some type of squash seedling popping up here and there - in the raspberry patch and in the center of one of the new raised beds. I decided to leave them alone and see what we would get. I never imagined they would be the most successful plants in the garden. Last week we harvested about a dozen or so big, beautiful butternut squash! I peeled, diced and roasted most of them to freeze for use in the winter and I made up a big batch of my favorite butternut squash soup. 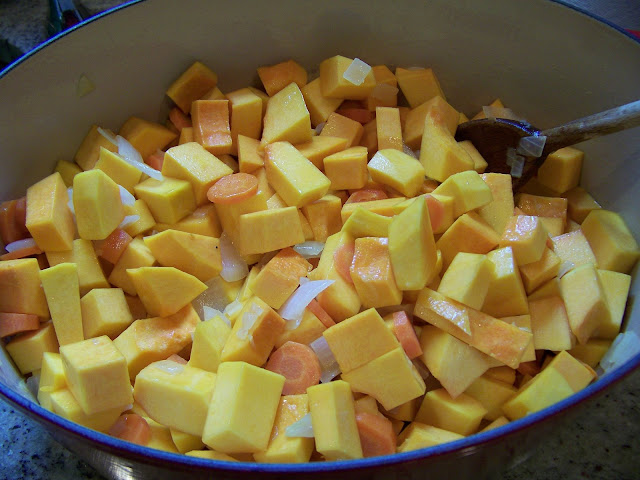 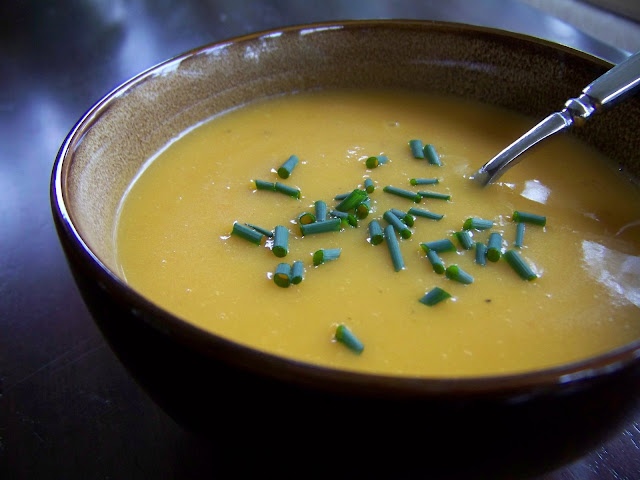 Melt the butter in a large pot. Add the squash, carrots, onions, thyme, ground red pepper, and salt and pepper to taste. Saute until the squash begins to soften and brown. Add broth and bring to a boil. Reduce heat and simmer until vegetables are very tender, about 30 minutes. Cool slightly. Working in batches, puree the soup in a blender until smooth (or use an immersion blender right in the pot). Add nutmeg and heavy cream, and adjust seasonings. Sprinkle with chives when serving. If reheating, add more broth or water to thin to desired consistency.

Note:  You can easily make this a curried butternut squash soup by sprinkling in some curry powder, either to the whole pot or to each bowl when serving.  Adding the spice to the individual bowls is a great option if you have family members with different preferences.
1 comment: