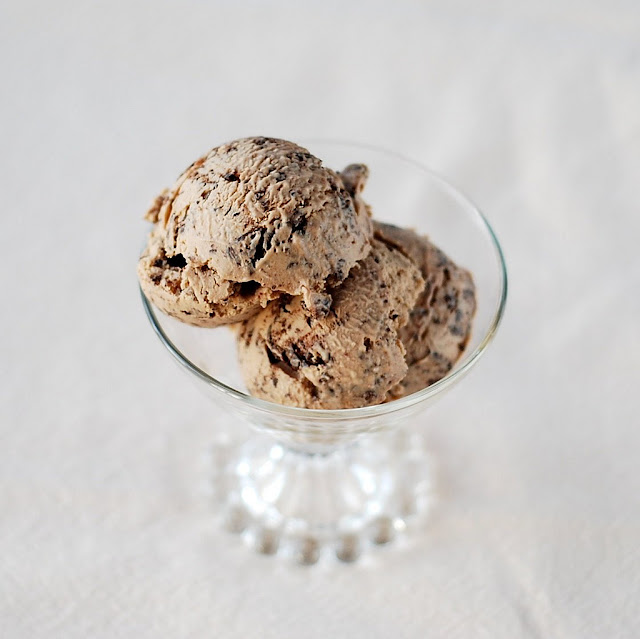 Gianduja-Stracciatella Gelato...say that three times fast! I would myself, except I have to look up how to pronouce gianduja first...and google says you pronounce it john-DOO-yah or zhahn-DOO-yah to be more Italian-esque.

Now on to vocabulary...

Gianduja - is simply chocolate (usually milk chocolate) combined with hazelnut paste most commonly, but any nut paste can be used. Nutella, the original gianduja, is spreadable, but you can also find it in a solid block form as well, like this one from Callebaut

Stracciatella - the super-thin chocolate "chips" in ice cream produced by pouring melted chocolate in a thin stream into the ice cream machine at the very end of the churning period. The stream of chocolate instantly freezes into very thin chocolate pieces which readily melt in your mouth, giving a burst of chocolate flavor in each spoonful.

Gelato - refers to Italian-style ice cream which has less milkfat, less air incorporated into it, and is stored and served at a slightly higher temperature than ice cream so that it is softer and more dense. The lower milkfat is achieved by using a higher ratio of milk to cream than full fat ice creams. Cream can mute the flavors in ice cream, so gelato is thought to allow the flavors to be experienced more fully. High milkfat ice creams can also leave an undesirable film in the mouth after the bite has been swallowed. I'm not sure if this recipe is officially a gelato, as it has more cream than other recipes I've seen for gelato. Looks like I'll have to make a few more gelatos for the sake of research. (drats!)

This gelato/ice cream is full of chocolatey goodness with a hint of hazelnuts, and a subtle crunch from the stracciatella and hazelnut paste, but I still found myself wanting a stronger hazelnut flavor. The next time I make this, I might try to use Nutella instead of the chocolate and hazelnuts to make the recipe a little easier, or make a Nutella Stracciatella - now say that 3 times fast!

Gianduja-Stracciatella Gelato
from The Perfect Scoop by David Lebovitz

1. Toast the hazelnuts in a 350 degree oven for 10 minutes, until fragrant and lightly toasted. Place them in a kitchen towel after roasting to remove as much of the papery skin as possible. Discard the skins. Chop the hazelnuts in a food processor or blender until finely chopped.

2. Warm the milk with 1 cup of the cream, sugar, and salt in a saucepan. Once warm, remove from heat and add the chopped toasted hazelnuts. Cover and let steep for 1-1/2 hours.

4. Pour the hazelnut-infused milk through a strainer into a medium saucepan. Squeeze the nuts with your hands to extract as much of the flavorful liquid as possible. Discard the hazelnuts.

5. Rewarm the halzenut-infused mixture. In a separate bowl, whisk together the egg yolks. Slowly pour the warm hazelnut mixture into the egg yolks, whisking constanly, then scrape the warmed egg yolks back into the saucepan.

6. Stir the mixture constanly over medium heat with a wooden or heatproof plastic spatula, scraping the bottom as you stir, until the mixture thickens and coats the spatula. Pour the custard through the strainer and stir it into the melted milk chocolate. Add the vanilla and stir until cool over an ice bath.

7. Chill mixture thoroughly in the refrigerator, then freeze in your ice cream maker according to the manufacturer’s instructions.

8. While the ice cream is freezing, melt the chocolate in a heat-proof bowl over a pan of simmering water or in the microwave, stirring every 30 seconds until melted. At the end of the ice cream churning, pour the melted chocolate directly into the ice cream machine in a thin stream.

8. Serve immediately for a soft, smooth gelato or place gelato in a container and freeze for several hours for a firmer gelato.

Makes about 1 quart of gelato