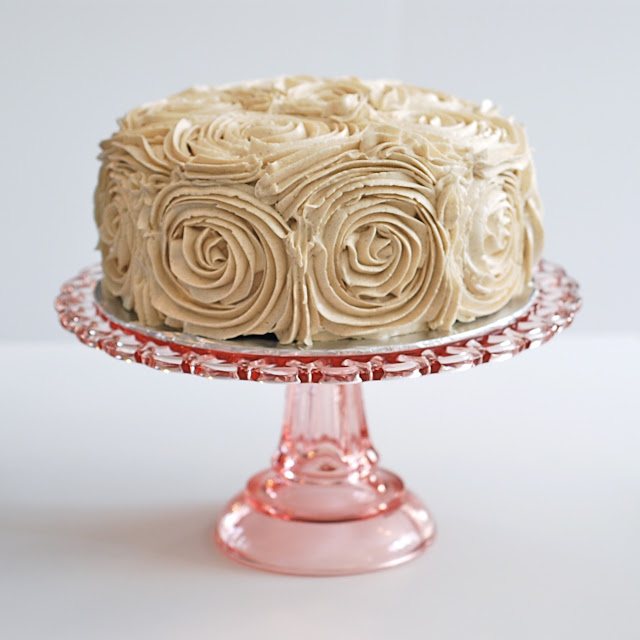 I needed to make a treat to donate to our school's annual auction and this seemed like the perfect thing to pack a visual punch to get the highest bid possible. I made a red velvet cake with cinnamon-vanilla swiss meringue buttercream and covered the whole cake with romantic roses - just in time for Valentine's Day. 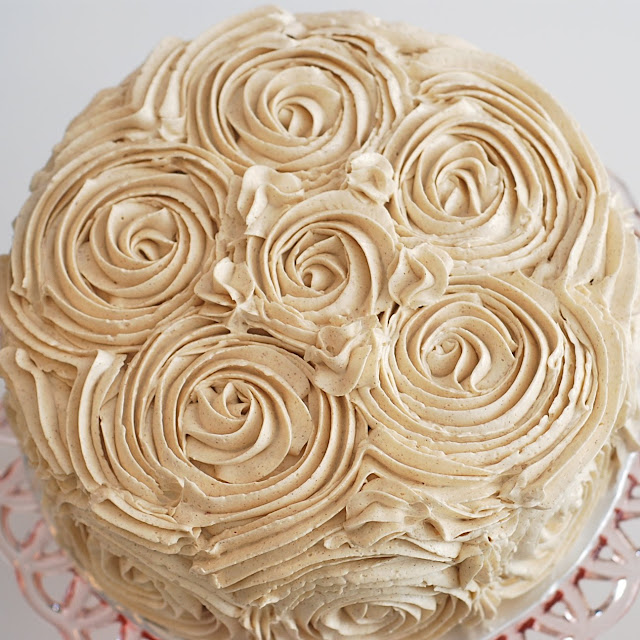 I'm proud to say that several people bid on the cake to raise money for our school! Thank you everyone! 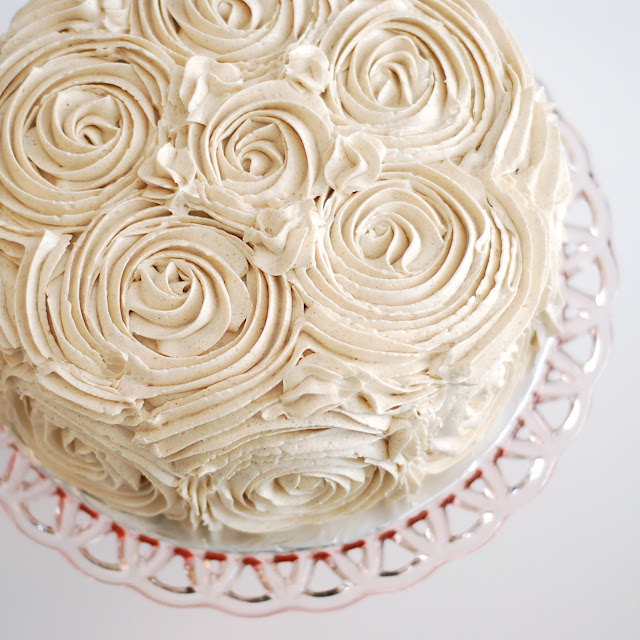 1. Preheat the oven to 325 degrees F. Butter three 8-inch round cake pans (I used 9-inch pans), line the bottoms with parchment paper, and butter the parchment. Dust with flour, and knock out the excess flour. (I didn't flour, just used cooking spray in place of the butter.)
2. In a medium bowl, whisk together the cocoa powder, food coloring, and boiling water. Set aside to cool. In the bowl of an electric mixer fitted with the paddle attachment, cream the butter and shortening until smooth. Scrape down the bowl and add the sugar. Beat until the mixture is light and fluffy, about 5 minutes. Add the eggs, one at a time, beating well after each addition.
3. Stir the buttermilk and vanilla into the cooled cocoa mixture. Sift the flour and salt together into another medium bowl. With the mixer on low, add the flour mixture, alternating with the cocoa mixture, to the egg mixture in three separate additions, beginning and ending with the flour mixture. Beat until incorporated. In a small bowl, combine the vinegar and baking soda and stir until the baking soda dissolves; the mixture will fizz. Add to the batter and stir until just combined.
4. Divide the batter among the prepared pans and smooth the tops. Bake until a toothpick inserted in the center of each cake comes out clean, about 30 minutes, rotating the pans halfway through the baking time. Transfer the cakes to a wire rack and let cool for 20 minutes. Invert the cakes onto the rack, remove the pans, and let cool completely. Remove the parchment.


1. Place sugar and egg whites in the heat-proof bowl of an electric mixer. Set bowl over a pan of gently simmering water, and whisk until sugar has dissolved and egg whites are hot to the touch, about 3 minutes. Test by rubbing the mixture between your fingers; it should feel completely smooth.

2. Transfer bowl to a stand mixer. Using the whisk attachment, beat on high speed until mixture has cooled completely and formed stiff and glossy peaks, about 10 minutes.

3. Add the butter, one piece at a time, and beat until incorporated after each addition. Don't worry if the buttercream appears curdled after all the butter has been added; it will become smooth again with continued beating. Add vanilla and cinnamon, and beat just until combined.

4. Switch to the paddle attachment, and beat on the lowest speed to eliminate any air pockets, about 5 minutes. If using buttercream within several hours, cover bowl with plastic wrap, and set aside at room temperature in a cool environment. Or transfer to an airtight container, and store in the refrigerator, up to 3 days. Before using, bring buttercream to room temperature, and beat on the lowest speed with the paddle attachment until smooth, about 5 minutes.

Email ThisBlogThis!Share to TwitterShare to FacebookShare to Pinterest
Labels: Cakes and cupcakes, Icings